Numbers from the most recent census in 2010. For Hispanic/Latinx statistics, see tables 3, 4, and 18.

UnidosUS (formerly The National Council of La Raza) is a nonpartisan Hispanic civil rights and advocacy organization in the United States.

This page summarizes the report. You can download the full report, including those for previous years.

You can break the Alabama statistics down by county.

Facts on Latinos in the U.S. Pew Hispanic Center, 2019. www.pewresearch.org/hispanic/fact-sheet/latinos-in-the-u-s-fact-sheet/

The most recent report from Pew. Includes socioeconomic status, language use, and educational attainment. There is an accompanying blog post, Key facts about U.S. Hispanics and their diverse heritage.

While older, this report looks at all aspects of health in Alabama Hispanics including diseases and infant morality.

2018 population estimates. Results can be narrowed to a county or zip code.

Alabama projections are on page 56, and other Alabama statistics are on pages 22, 23, 28, and 135.  Also review the brief Knocking Update: New Data about Private High School Graduates.

Maps locations and numbers of speakers of twelve languages commonly spoken in the United States. In the map, you can narrow the speakers by language.

This site has many statistics on Hispanics in the United States including language use, politics, and racial identity. Search for “Alabama” in the box on the home page.

You can narrow the table to just Hispanics and view the data by table, map, or trend graph. Data is from 2008-2017.

A pre-2020 census look at the wide dispersal of the nation’s Hispanic, Asian and black populations. Map is "Metros with largest 2018 Hispanic populations and highest 2010-2018 growth" (Tuscaloosa has greater than 200% of the national Hispanic growth rate).

Presents a selection of indicators that examine differences in educational participation and attainment of students in the racial/ethnic groups of White, Black, Hispanic, Asian, Native Hawaiian or Other Pacific Islander, American Indian/Alaska Native, and Two or more races. Summarizes data on topics such as demographics; pre-primary, elementary, and secondary participation; student achievement; student behaviors and persistence in education, post secondary education, and outcomes of education.

Reports on social issues related to Hispanics/Latinx. To locate reports that include Alabama, use the search box on the left. Reports are in both English and Spanish. 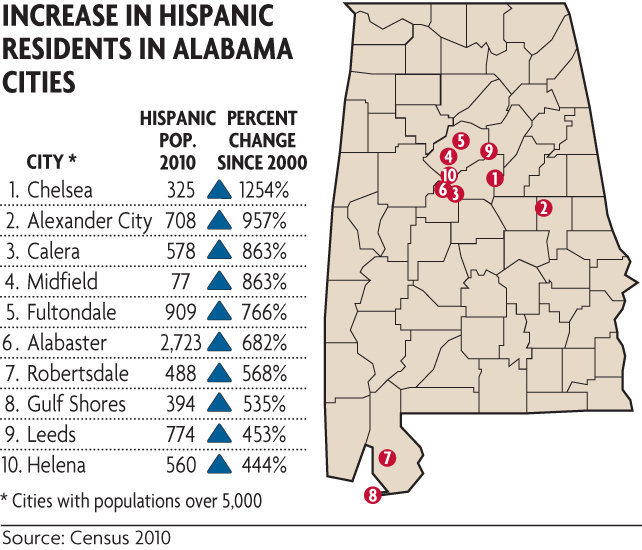 All print resources are on the 3rd floor of th Mervyn H. Sterne Library.

Campbell, Kristina. "The 'New Selma' and the Old Selma: Arizona, Alabama, and the Immigration Civil Rights Movement in the Twenty-First Century." Journal of American Ethnic History 35.3 (2006): 76-81.

Articles are found in Databases.  The Birmingham News has published many articles about the influx on Hispanics in Alabama. You can search the archives and then view the microfilm in Sterne Library for dates before 2009. After 2009, you must go to the Birmingham Public Library and use the NewsBank database. For information on finding articles in other Alabama newspapers, refer to the guide Alabama Newspapers in UAB Libraries Databases.

*Make sure that you sort articles by relevance rather than date.

This is the full text to the controversial immigration law passed in 2011. 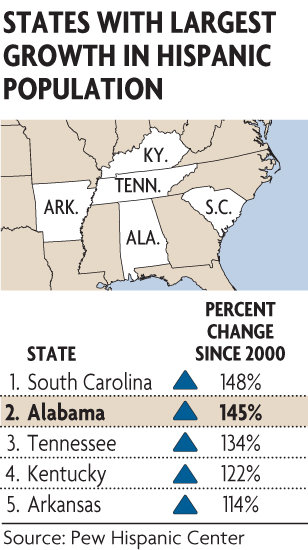