“Double, double toil and trouble; Fire burn and caldron bubble. Fillet of a fenny snake, In the caldron boil and bake; Eye of newt and toe of frog, Wool of bat and tongue of dog, Adder's fork and blind-worm's sting, Lizard's leg and howlet's wing, For a charm of powerful trouble, Like a hell-broth boil and bubble.”

The oft-quoted song of the Weird sisters from Macbeth conjures up images of three vicious hags standing around a large cauldron throwing in all manner of despicable ingredients to create the most maleficent concoction. Two characteristics stand out with regards to the sisters – first, they are of course women, and second, they know just what to combine to create ill health, i.e. they have knowledge of medicines. This exhibit explores the interplay of gender and health care in the witch craze of early modern Europe and America, for these two issues proved so important as to be virtually inseparable from an understanding of what took place. 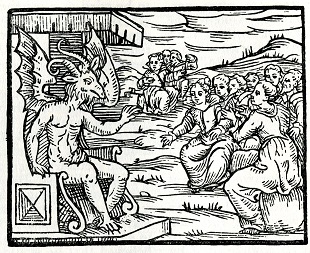 Witches commune with the Devil. 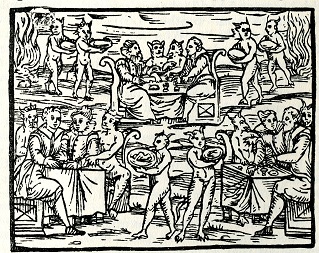 The Witches' Sabbath (above), and a witch in flight to the Sabbath (below). 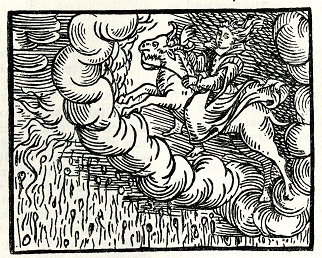 These illustrations come from a 1929 reprint of Compendium Maleficarum in the Reynolds-Finley Historical Library.

Though witches have an ancient history as individuals with a strong connection to the forces of the natural world, they were identified by Europeans during the late Middle Ages as those possessed by or in allegiance with the Devil or demons. Witchcraft was therefore considered a very serious form of heresy. The Inquisition had the power to prosecute witches since the 13th century, but witch-hunts did not become widespread and extensive until the late 1400s. In a Papal Bull of 1484, Pope Innocent VIII acknowledged the existence of witches and their ability to do harm, further granting permission to inquisitors to prosecute them. Shortly thereafter, in 1486, Inquisitors Heinrich Kramer and Jakob Sprenger published the Malleus Maleficarum, or the witch’s hammer, a guidebook for identifying practitioners of the magical craft, which caused an increase in hunts for witches, their resulting trials, tortures and tens of thousands of deaths by burning, hanging, and drowning throughout Europe and in colonial America.

Witch-hunts persisted with full force through the 16th, 17th and early 18th centuries, a time referred to as the "early modern period" by historians, and were strengthened by the publication of additional manuals for hunters, such as Francesco-Maria Guazzo’s Compendium Maleficarum (1609). The book includes such chapters as: “Of the Witches’ Pact with the Devil,” “Whether Witches are Really Transported from Place to Place to their Nightly Assemblies,” “The Laws Observed by Witches in Causing and in Curing Sickness” and “How to Distinguish Demoniacs and Those who are Simply Bewitched.” This exhibit explores these themes (and others) which connect witchcraft lore to disease, medicine and the role of women in healthcare during this period. 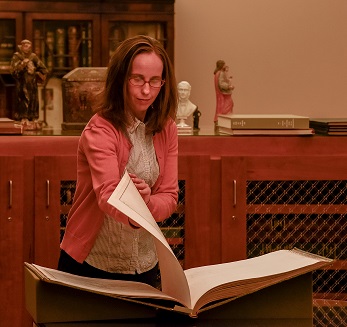