Transactions of the Southern Surgical Association: Treatment of Gallbladder Disease

This guide provides an overview of the Transactions of the Southern Surgical Association digital collection, as well as instructions on how it can be searched, browsed and used for historical research.

Tracing the History of Surgery: Treatment of Gallbladder Disease

The Transactions of the Southern Surgical Association digital collection provides an excellent platform for tracing the history and development of surgery for over a hundred years. The first topic we are examining is the treatment of gallbladder disease, or cholecystitis, which has seen significant change during this time. Below are some terms needed to understand the history of this topic and to perform searches within the digital collection. 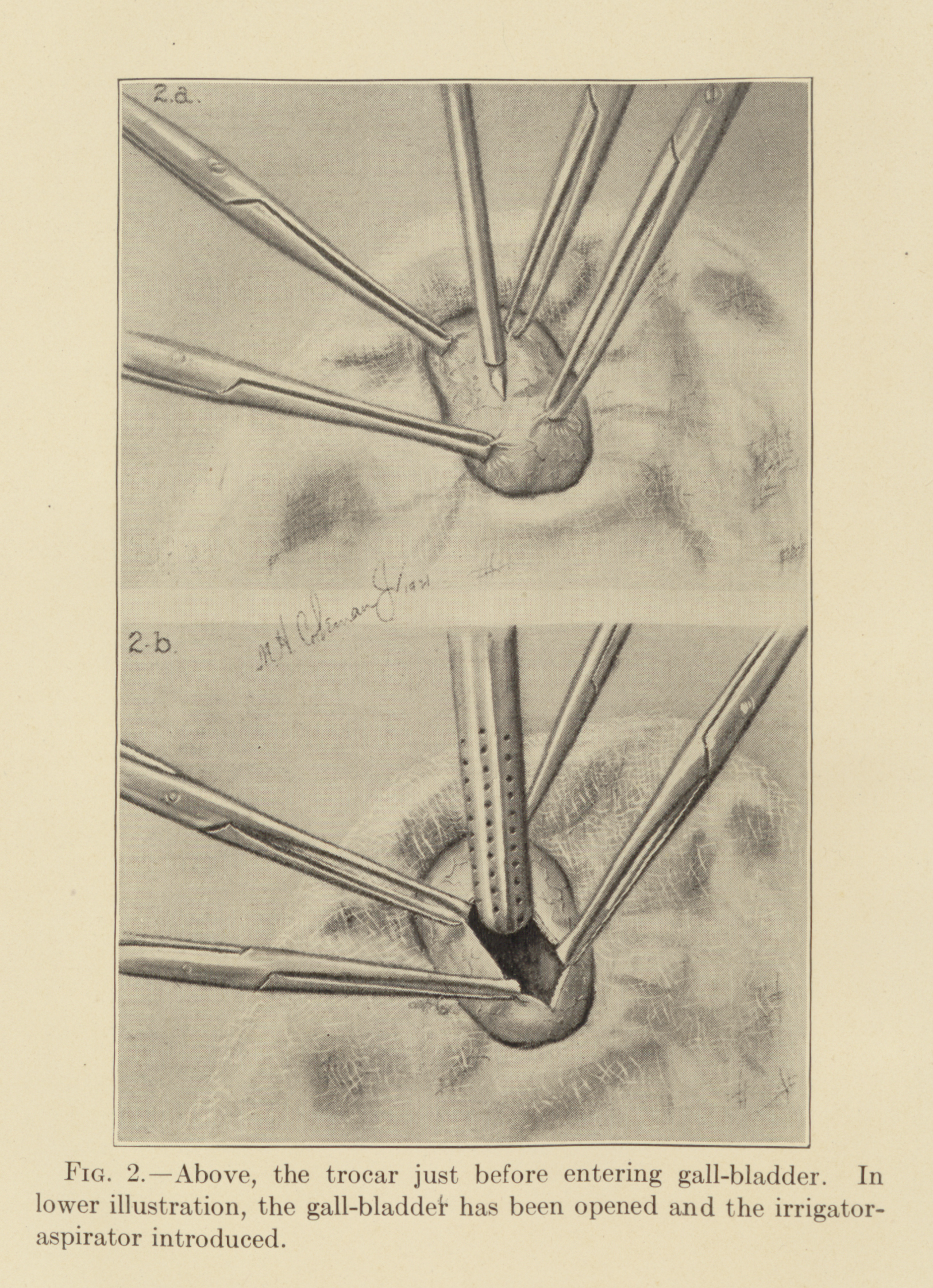 Some additional articles within the transactions contributing to the debate over the use of cholecystectomy or cholecystostomy include:

Long JW. The Importance of Preserving the Gall-Bladder in Operations on the Gall Passages. Trans South Surg Assoc 1910; 23: 25-34.

Mayo WJ and CH Mayo. A Review of One Thousand Operations for Gallstone Disease, with Especial Reference to the Mortality. Trans South Surg Assoc 1904; 17: 30-41.

Finney JMT. A Study of Some of the Unsatisfactory Results Following Operations upon the Biliary Tract. Trans South Surg Assoc 1913; 26: 483-522. 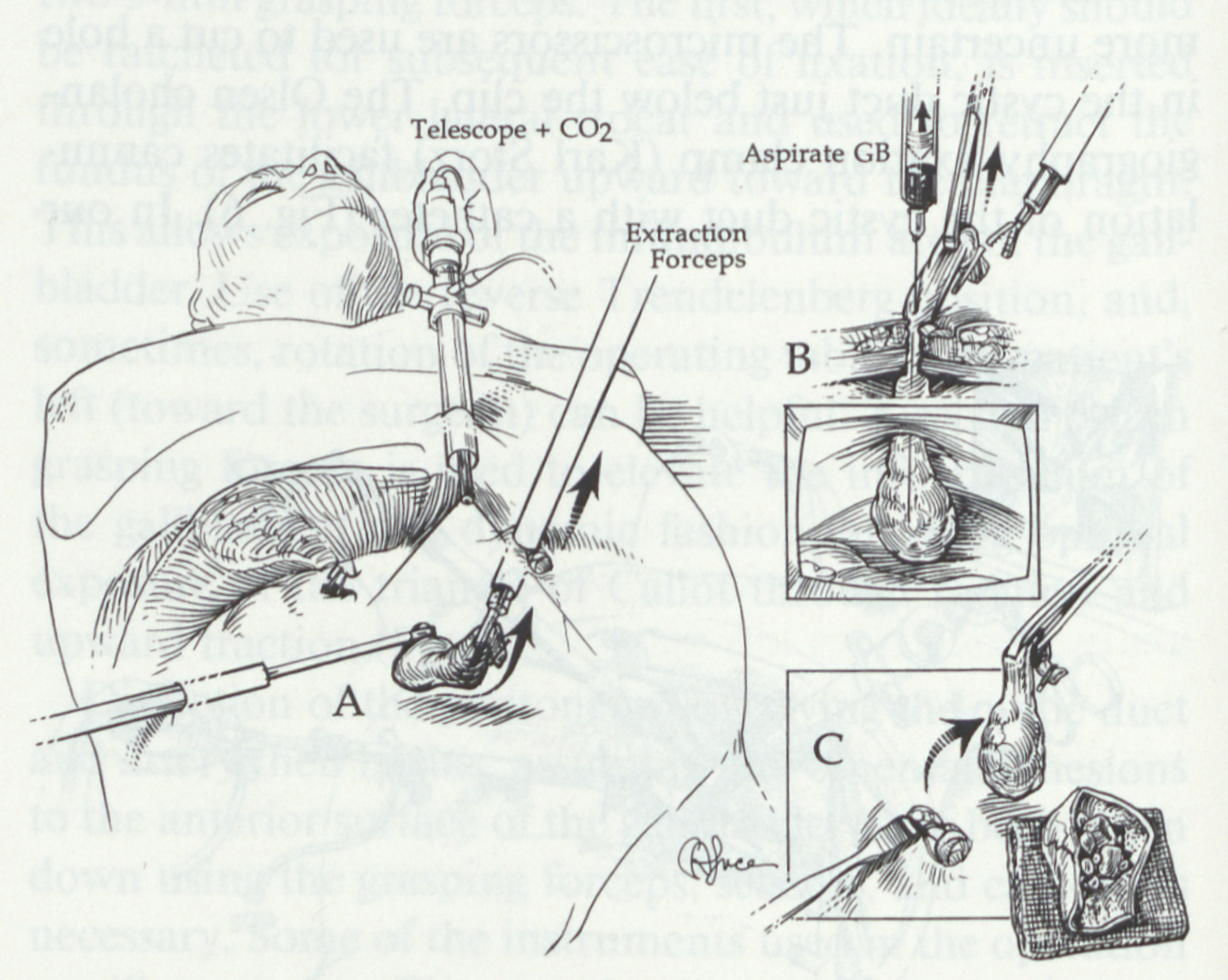 Debates surrounding the use of cholecystectomy or cholecystostomy as treatment permeated the early years of the association. Having only first been performed by German surgeon Carl Langenbuch in 1882, the cholecystectomy procedure was still new when the Southern Surgical & Gynecological Association began meeting in 1888, and the removal of the organ still caused concern for some surgeons into the 1920s.

Dr. W. E. B. Davis is the first to mention the term "cholecystectomy" in his article titled "A Case for Cholecystotomy for Stones in the Gall-Bladder and Cystic Duct, with Remarks on Gall-Stones" within the fourth volume of Transactions for 1891. His conclusion is that the removal of the gall-bladder should only be done when cholecystotomy is not a viable option "...owing to the friability of the bladder walls, or when the bladder cannot be brought to the abdominal wound" (p. 372).

As far back as the 17th century, experiments proved that dogs could live without a gallbladder, and certainly the early cholecystectomies of the 1880s and 90s had proven the same in humans. But still the choice to remove the organ when diseased was generally considered a second choice for many SSA fellows at the turn of the 19th century. As John B. Deaver explained in 1907:

"While I am aware that patients who have had their gall-bladders removed may remain perfectly well, this does not to my mind demonstrate that the gall-bladder does not serve a useful purpose; that the judicious surgeon - the surgeon who regards Nature and assists her as far as he can - will not ablate a gall-bladder which is still functionally active or which may later become functionally active" (Deaver JB. Some of the Reasons Why Cholecystectomy Should Not Be Performed as Frequently as at Present Advocated by Many Surgeons. Trans South Surg Assoc 1907; 20: 459-466).

Nevertheless, evidence of cholecystectomy's more beneficial outcome and closure to gallbladder disease was becoming apparent to most SSA fellows by the second decade of the 20th century. George Crile's 1913 article, "Cholecystectomy vs. Cholecystostomy," concludes that:

In addition to better morbidity, by this decade there had been enough operations to allow for drawing mortality rate conclusions as well. The chart below showing the lower mortality rate in patient who underwent cholecystectomy (1.2%) as opposed to cholecystostomy (3.4%) comes from an article by Charles H. Mayo, titled "Cholecystostomy versus Cholecystectomy" within the 1915 Transactions.

However, there were still surgeons in the 1920s encouraging their colleagues to take a more cautious approach to removal of the gallbladder. In 1921 A. Murat Willis argued:

"Believing that the patient is suffering from cholecystitis, surgeons recommend either cholecystostomy for drainage or else the removal of the gall-bladder. The attempt has been made elsewhere to point out the evil consequences which are prone to follow the former of these procedures in the cases of slight disease of the gall-bladder, the resulting infection and adhesions rendering the patient's condition worse than it was before the operation. On the other hand, are we not becoming a little overenthusiastic in regard to removal of the gall-bladder? The results which have followed cholecystectomy with omission of drainage are certainly good, but it would seem wiser to reserve this operation for cases where we are reasonably certain that the organ is diseased" (Ideal Cholecystostomy... Trans South Surg Assoc 1921; 34: 94).

Once cholecystectomy became the proven and preferred treatment, discussions within the transactions turned to how quickly the operation should take place after stones are discovered, and whether other conditions of the patient might affect the procedure, leaving cholecystostomy as the preferred alternative in certain cases. In the 1958 volume of the transactions, Robert S. Sparkman explains in his article "Planned Cholecystectomy":

"Cholecystostomy, once the standard operation for gallbladder disease, is now employed principally in those patients who are too ill to undergo the more extensive procedure of cholecystectomy, or in whom an attempt at cholecystectomy is abandoned because of technical difficulty or deterioration of the condition of the patient. If the critical condition of the patient is apparent prior to operation, the surgeon may commit himself to cholecystostomy from the beginning (planned cholecystostomy). The more extensive incision, manipulation, and anesthesia incident to cholecystectomy are thereby avoided. By thus limiting the operative procedure to a minimum, the surgeon offers the poor-risk patient the best chance for survival" (p. 155).

The use of a camera scope was first utilized by Erich Muhe in Germany in 1985 to reduce the required size of the surgical opening and the invasiveness of the cholecystectomy. However, knowledge of the technique did not reach beyond Germany in its early years, and the procedure became known as one first performed in France in 1987. By the late 1980s, it was taking off in America.

The new operation, laparoscopic cholecystectomy, was first discussed by the Southern Surgical Association at the 1990 meeting, in which it was an important topic of research presentations. See the Transactions, Vol CII, 1990 to read the association's first articles on this surgery. The SSA fellows' reports were overwhelmingly positive and noted the benefits of laparoscopy as "...an improved treatment option, resulting in significantly less postoperative pain, hospitalization, and recuperation time" (Shirmer BD et al. Laparoscopic Cholecystectomy. Trans South Surg Assoc 1990; 102: 301). This surgery is still the preferred treatment today.