Monsters appear in ancient mythology dating back thousands of years. From the sphinx of ancient Egypt (a hybrid creature with the body of a lion and human head), to Xiangliu, the nine-headed snake of Chinese mythology, monsters are found in myths, legends and folklore of cultures all around the world. Some of the most popular examples from Western culture originated in the Classical myths of Ancient Greece and Rome, as well as the Ancient Germanic myths, which are highlighted on this page. The tale of a man-made monster from Judaic lore is told on the page titled, "Monster of the Early Modern Period."

One of the most famous tales of Greek mythology depicts the female monster, Medusa. She was said to be one of the three Gorgon sisters of the sea god, Phorcys. She was thought to be among the most beautiful of women until she defiled the temple of Athene and was cursed by the gods. Her punishment was to be turned into a monster so that none could look upon her without being turned into stone. She was described as having wings and tangled snakes instead of hair. She was eventually slain by the mythical hero, Perseus, and even after death, her head held its magical power and was used to turn the Titan, Atlas, to stone. 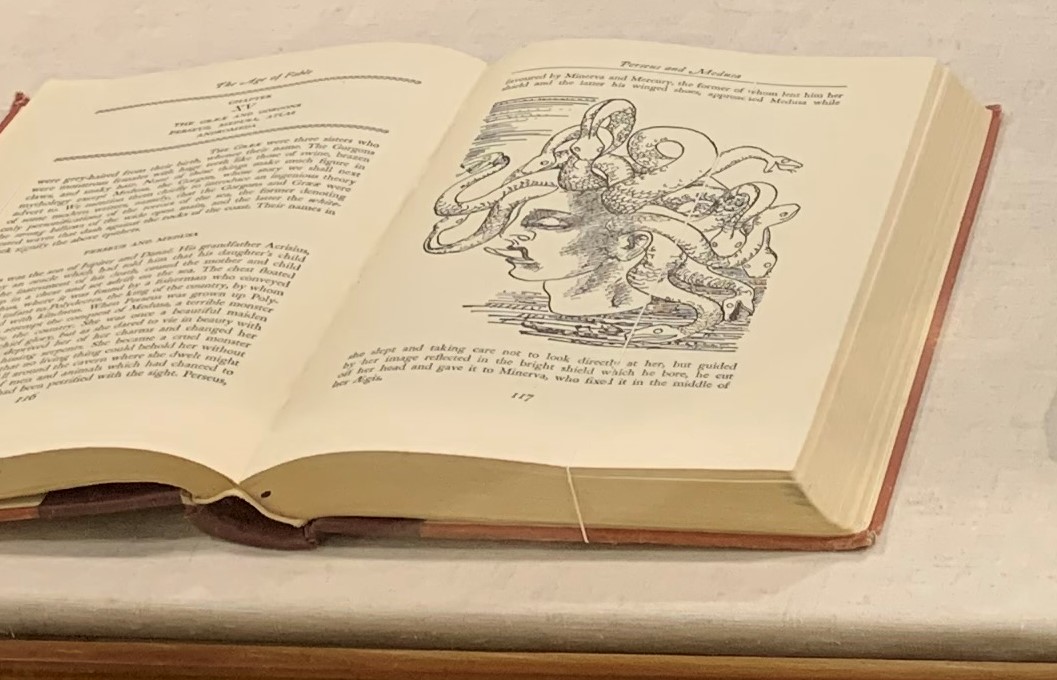 This illustration of Medusa is shown within Thomas Bulfinch’s Age of Fable, or the Beauties of Mythology (1942), Mervyn H. Sterne Library. 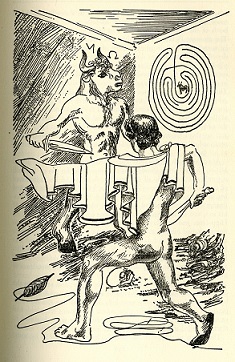 In Greek mythology, the Minotaur was a man with the head of a bull, a monstrous human-bull hybrid, who dwelt in the midst of a labyrinth within the castle of King Minos on the island of Crete. According to the myth, the Athenians were responsible for the death of Minos’s son, Androgeus, and thus, either to avert a plague caused by the crime, or by other accounts, due to the loss of a war brought on by the death, Athens was forced to send periodic tributes of seven male youths and seven female maidens to be sacrificed to the Minotaur, who fed on human flesh. This continued until the Athenian hero, Theseus, volunteered to become one of the tributes, fought and killed the Minotaur, and used a ball of red twine given to him by Minos’s love-struck daughter, Ariadne, to lead his fellow Athenians out of the monster’s great labyrinth. (Illustration from: Thomas Bulfinch’s Age of Fable, or the Beauties of Mythology, 1942, illustrated by Stanley William Hayter).

In the epic poem, Beowulf, which is one of the most important Old English literary works, the protagonist, Beowulf, the nephew of the King of the Geats, comes to the aid of Hrothgar, king of the Danes and fights against several monsters. Two of the characters are Grendel and his mother, which are described as troll-like monsters. Trolls originate from Norse mythology and Scandinavian literature and were said to be unfriendly, easily tricked and of a larger stature than humans. They could be found in mountains, caves and rocks and had a preference for human flesh when available. They were often included in literature to positively contrast the hero of the story. After the defeat of Grendel and his mother, Beowulf becomes King of the Geats and eventually dies while killing a cursed dragon, the third and final monster that he faces in the tale.

The illustrations shown here are within the 1939 edition of Beowulf, illustrated by Lynd Ward, Mervyn H. Sterne Library. 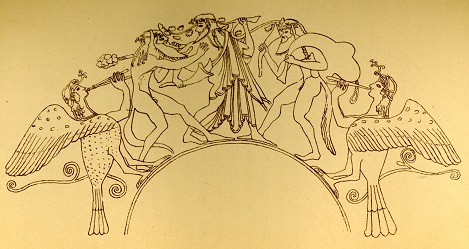 Sirens were said to be some of the most dangerous of sea monsters. They lured sailors to their deaths by enchanting them through music and singing. They were described as a combination of woman and bird, with the head of a woman but having bird feathers and scaly feet. The most famous literary appearance of the sirens was in Homer’s Odyssey as they attempted to draw Odysseus and his crew to their deaths on the way home from the Trojan War. The only way that they avoided death was to stop their ears with wax to avoid hearing the sirens’ beckoning songs. According to legend, Odysseus and his crew were fortunate as there were many souls lost to the sirens. (Image above from: J. E. Harrison, Myths of the Odyssey in Art and Literature, 1882, Mervyn H. Sterne Library). 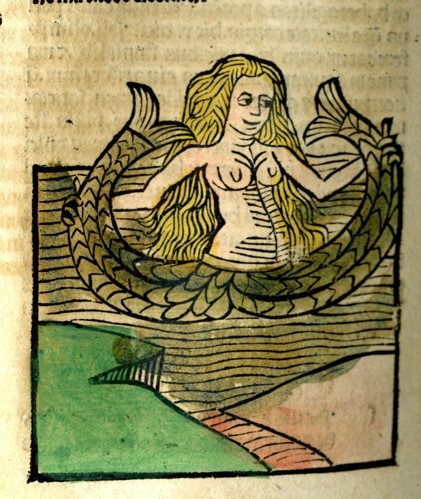 This illustration of a siren comes from the Reynolds-Finley Historical Library's copy of Hortus Sanitatis (1497). The description in this natural history work resembles much of the story told by Homer:

“Siren, the mermaid is a deadly beast that bringeth a man gladly to death. From the naval up she is like a woman with a dreadful face, long slimy hair, a great body, and is like the eagle in the nether part, having feet and talons to tear asunder such as she geteth; her tail is scaled like a fish, and she singeth a manner of sweet song and therewith deceiveth many a good mariner, for when they hear it they fall on sleep commonly and then she cometh and draweth them out of the ship and teareth them asunder… But the wise mariners stop their ears when they see her, for when she playeth on the water they be in fear and then they cast out an empty tone to let her play with it till they be past her. This is specified of them which have seen it. There be also in some places of Arabia serpents named Sirens that run faster than an horse and have wings to fly.”

Originating from both Greek and Roman mythology, the Cyclopes were one-eyed monsters that descended from the giants. They first gained notoriety when they fought alongside Greek god, Zeus, against the Titans, and they were said to live on a remote island. They fed on human flesh, and had a reputation of being easily duped by passing travelers. The chief of the Cyclops, Polyphemus, appears in the famous epic, the Odyssey, when the main protagonist, Odysseus visits the island of the Cyclops. The myth goes that Polyphemus trapped Odysseus and his men in a cave to feast on them, but Odysseus lured him into a deep sleep and blinded him in order to escape. 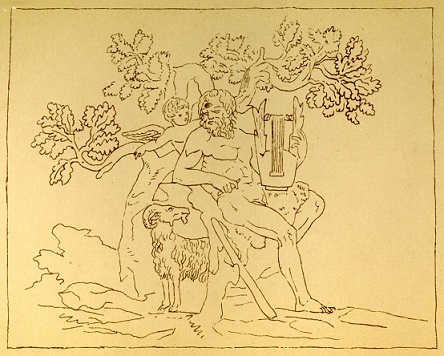