Marvels of the Early Modern Period

During the 1500s and 1600s, scholarly inquiry into the anomalies of nature was beginning to transform into the scientific study of teratology, but myths still abound of the fantastical monsters that could be found in distant lands, and strange, fanciful cases of half-human, half-beast hybrids continued to populate this literature. Evidence from the ancient scholars still held sway over empirical verification, but the Scientific Revolution was beginning to transition this mindset. Thus scholars worked to catalogue the reported cases of the marvelous throughout history in order to determine their veracity. 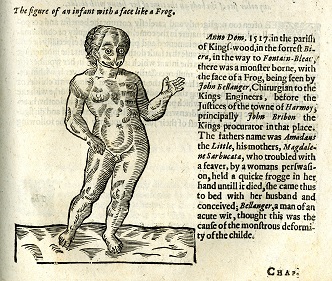 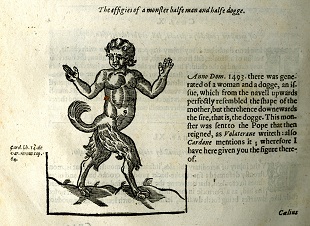 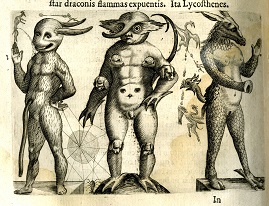 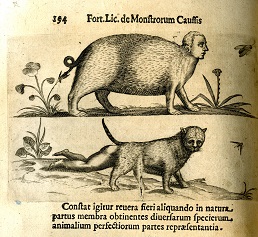 This portion of the exhibit examines the monsters within the texts of one 16th century writer, Ambroise Pare (left two images above), and one from the 17th century, Fortunio Liceti (right two images above). Below are more examples from their works. Click on the images to enlarge.

French surgeon Ambroise Pare (1510-1590), provided one of the first attempts to describe and explain birth defects and anomalies in his Des Monstres et Prodiges, or On Monsters and Marvels (1573). Pare tried to identify the causes of anomalies as well, noting both natural and supernatural influences, such as sorcery, creation by imagination (see the boy with a frog face above), and the notion that the birth of monsters portend unfortunate events. For example, he records that in the year 1254, a war took place between the Florentines and Pisans in Italy after a colt was born in Verona with a man’s face. The monster was seen as an omen. (Illustration from: Ambroise Pare, Les oeuvres…, Paris, 1575, Reynolds-Finley Historical Library). 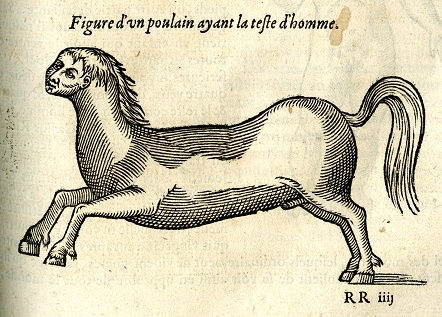 Below are additional images and corresponding transcribed excerpts from the English translation of Ambroise Pare's collected works titled, The workes of that famous chirurgion Ambrose Parey (1634), in the Reynolds-Finley Historical Library. Click on the images to enlarge. 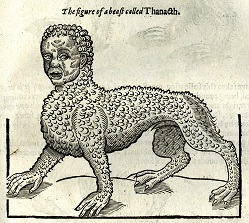 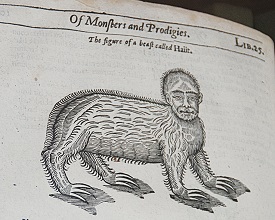 During the 16th century, few had the opportunity to travel to the Americas or the East. One who did was the French priest, explorer and cosmographer, Andre Thevet (1516-1590), a contemporary of Ambroise Pare, who reports many of Thevet’s animal sightings in his work. The Thanacth (left), was seen when Thevet was on the Red Sea, and he explained that the “…bigness and shape of his limbs was not unlike a Tiger, yet had the face of a man, but a very flat nose: besides, his fore feet were like a mans hands, but the hinde like the feet of a Tiger, he had no tail, he was of a dun colour.” Pictured right is the “Haiit,” which “is bred in America” and is “of the bigness of a Monkey, with a great belly, almost touching the ground, and the head and face of a child.” 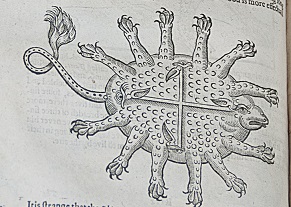 “I have taken this following monster out of Leo’s African history; it is very deformed, being round after the manner of a Tortoise, two yellow lines crossing each other at right angles, divide his backe, at every end of which he hath one eye, and also one eare, so that such a creature may see on every side with his foure eyes, as also heare by his so many eares: yet hath hee but one mouth, and one belly to containe his meat; but his round body is encompassed with many feet, by whose helpe he can go any way he please without turning of his body, his taile is something long and very hairy at the end. The inhabitants affirme that his blood is more effectual in healing of wounds than any balsome.” 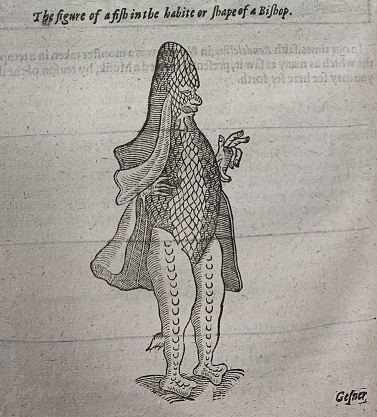 The sea-monk we saw in Hortus Sanitatis, but Pare tells us also of the sea-bishop, which is described as a monster “in the manner of a Bishop, covered with scales, having his miter and pontifical ornaments, which was seen in Poland, in 1531…” (Pare, On Monsters and Marvels, 1982 translation by Janis L. Pallister).

Shown here are various sea monsters, within the 1634 English translation of Pare's collected works. Click to enlarge and see more. 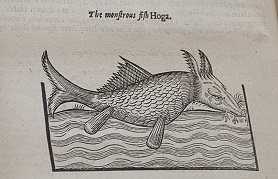 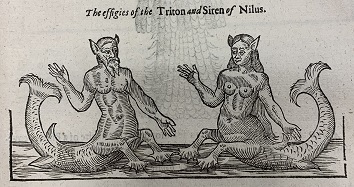 In the 17th century, De Monstrorum Caussis, Natura, et Differentiis Libri Duo (1634), by Italian physician and philosopher, Fortunio Liceti (1577-1657), was the most influential work on the subject, and many of the same mythical monsters and hybrids from Pare are retained in Liceti’s reports. However, Liceti tried to provide more natural explanations of these beings, though the accounts he recorded from historical sources do not reject the supernatural. But his work signaled a shift to a more scientific approach as he attempted to catalogue all reported cases, classify and explain their causes, and unlike many before him, Liceti did not view monsters in a negative light. He writes, “It is said that I see the convergence of both Nature and art, because one or the other not being able to make what they want, they at least make what they can” (qtd. in the Public Domain Review ).

Below are some monsters from Liceti's De Monstrorum... (1637), held in the Reynolds-Finley Historical Library. The descriptions are translated directly from the Latin text. Click on the images to enlarge. 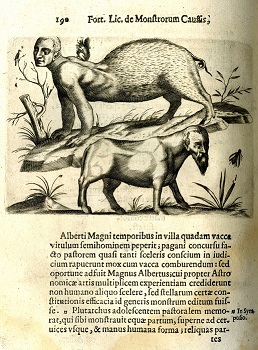 “In the time of Albertus Magnus (ca. 1200 – November 15, 1280), on a particular farm [most likely near Cologne, Germany where Albertus Magnus lived], a cow gave birth to a half-human calf; the peasants being made to rally, seized the herdsman as if he was the accomplice in a great crime, and next they were going to burn the cow, but fortunately Albertus Magnus arrived, who they trusted on account of his versatile experience in the astronomical arts, that it was not some crime against humanity, but the influence of a certain position of the stars that existed for the birth of this elevated monster.

Plutarch (A.D. 46 – ca. 120) speaks of a pastoral young man, who he himself revealed as the offspring of a mare. On top all the way up to the neck and hands were of human form; the remaining parts having that of a horse; and crying in the manner of newly born human babies.”

Liceti defends the existence of a young boy born with an elephant head in the manner shown here by listing all the various authors citing these cases from ancient times to his own: including Polydoros, Virgil (70-19 BC), Livy (59 BC– 17 AD), Fabio, Valerio, Maximo and Rueff (1500-1558 AD). This method of proof was common throughout the 17th century as verification from past authorities still carried significant weight. 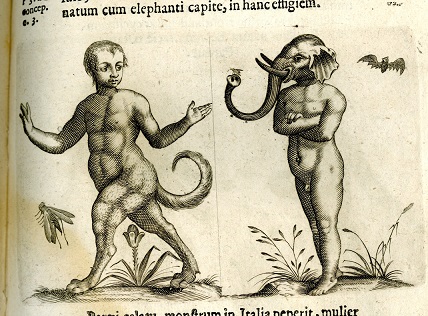 “In 1577… in the community of Blandy near Melun, a three-headed lamb was born; the middle head was thicker than the rest; when one bleats the remaining heads bleat together. This monster was affirmed by John Bellanger, having seen it himself.

In my home, in Padua, in the year 1624, a handmaiden deplumed a fat hen of mine in order to boil it, and she discovered in it feet with five digits on both sides, each with its own distinct talons.” 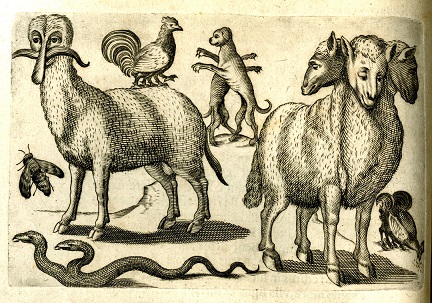 Liceti’s description of the half-pig, half-human animal pictured below illustrates his dedication to cataloguing all recorded incidents of monster cases. He records the years on the side next to the pertaining incident, noting:

“1011: A female swine gives birth to a fetus brought forth with a human face.

1018: The same sort of monster having come forth after a few years.

1109: In the parish of Lige a suckling pig which had the face of a human sprung forth from a mother pig.

1110-1118: As related by Pare and Lycosthenes, in a certain community of the Eburones, a pig brought forth of the litter one with the face, feet, and hands of humans; but the rest of the body recalling a swine. 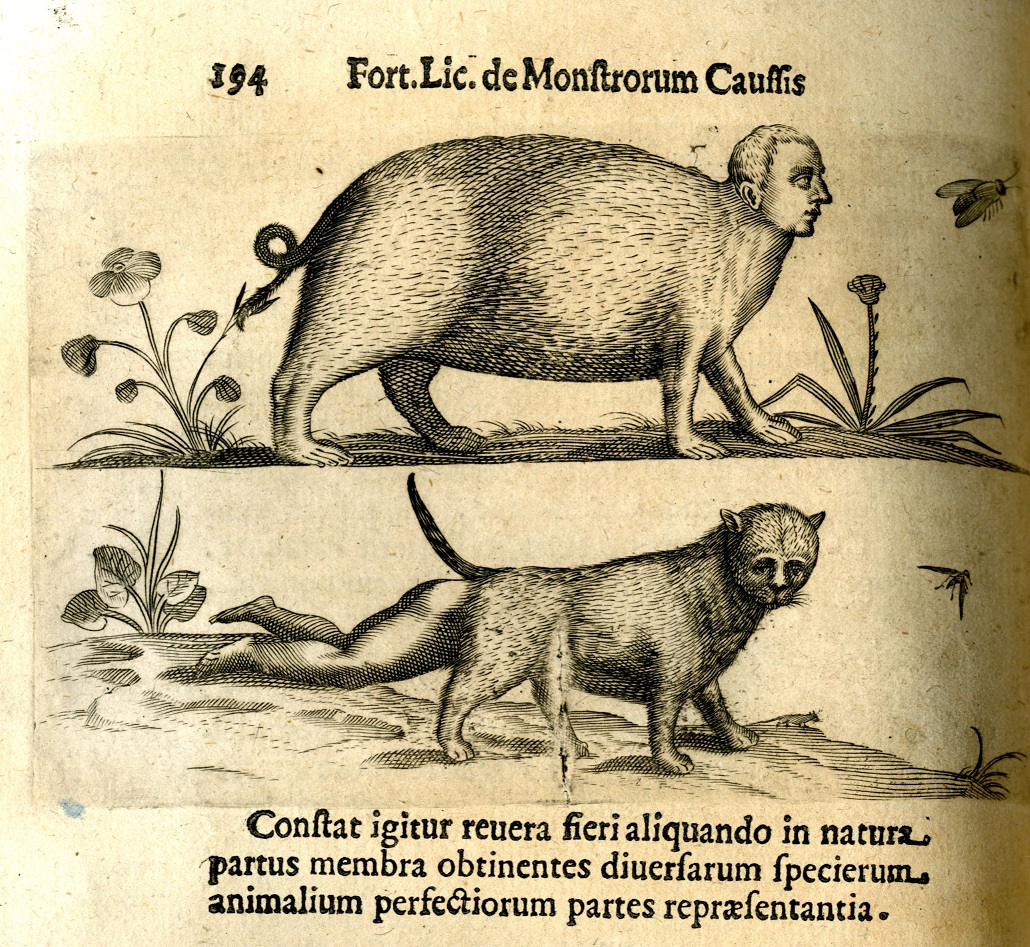 The Birth of Man-Made Monsters

At the same time as early modern physicians and naturalists were cataloguing, classifying and trying to explain the mysterious marvels of the natural world, another type of monster began to rise: those created entirely by man through science. Man-made monsters had their ideological origins in the Golem of Jewish folklore dating back to early Judaism. The Golem is an anthropomorphic being created out of inanimate matter, usually clay or mud. In the most famous tale involving Judah Loew ben Bezalel, a 16th century Rabbi of Prague, the clay Golem is brought to life through Hebrew ritual and incantation and defends the Prague Jews from anti-Semitic attacks.

Another man-made monster that arose during the 16th century is the alchemical homunculus, an ideological creation of the Swiss physician and alchemist, Paracelsus (1493/4 – 1541), who believed this “little man” could be made from scratch without the normal method of human procreation.

“Paracelsus considered both sperm and egg to have the full potential of life already within them… Paracelsus proposes that the life of the sperm can be brought to fruition ‘without the female body and the natural womb’… He attributes this to the fecund alchemical process of putrefaction, acting in some sense via the occult forces of ‘magnetism’” (Phillip Ball, The Devil’s Doctor, 2006).

The idea of the monster made by man through scientific means also inspired the famous story, Frankenstein, which will be discussed in more detail on the next page.