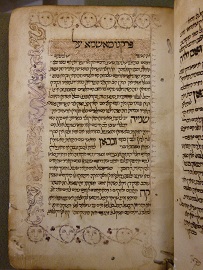 Medieval bestiaries were pictorial compendiums of animal-kind which often included the real alongside the mythical with tales and parodies of the beasts caged in a moralistic tone or portraying their symbolic nature. Different animals possess different strengths and weaknesses, and so one theory on the prevalence of mythical hybridization is that those imagining them are trying to combine those powers for symbolic moral purposes. The same type of creatures populate the margins of many medieval manuscripts, sometimes with the same moralistic tone, but other times simply reflecting the vivid imaginations of illuminators. Shown here are reprints within a series on “The Medieval Imagination.” Beasts: Factual & Fantastic (left) shows “Creatures from the Ends of the Earth,” dated to 1277. Bizarre hybrids in the margins of some famous manuscripts are displayed within Images in the Margins. On the right are hybrids creating a border to the text within the Reynolds-Finley Historical Library’s manuscript by Rhazes, Ninth Book of the Al' Mansuri, (Portuguese Hebrew manuscript; 1388 translation; early 1400s copy). 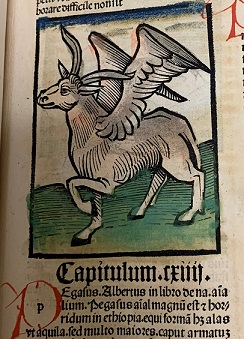 “Pegasus is a mighty great beast and it is in the land of Ethiopia and is formed like an horse with wings greater than an eagle, and it hath great horns in his head, and it is like a monster for all other beasts be of it afraid. It hath a great body and it runeth very swiftly through help of his wings, and it eateth much and persecuteth other beasts very sore, but it persecuteth man most of all.” 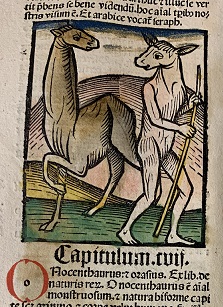 “Oraffius (Giraffe) is a beast having many colors and the fore part of his body is very high in such a manner that he may reach with his head 20 cubits, but the hinder part of him is very low, and it is footed and tailed like an hart.

Onocenthaurus (Onocentaur) is a beast and monster having a head like an ass, and all the other parts of the body is like a man. And when it beginneth to cry then it seemeth that it will speak but it cannot, and he throweth stones… with great strength at them that follow him for to take him. Adellin sayeth that this beast was not made at the beginning when all other beasts were created of god but that they come of a marvelous commission and strange generation.” 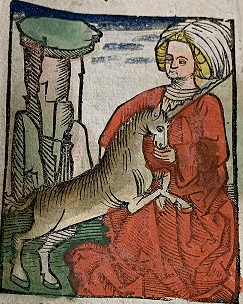 Using information derived from earlier medieval encyclopedias, Hortus Sanitatis, or "The Garden of Health" (1497), is considered one of the most important illustrated works documenting natural history from the Middle Ages. It contains over 1000 hand-colored woodcuts of all the animals, plants, gems, and stones believed to exist at the time. In the Middle Ages, when travel was difficult and so much of the world unknown, legends of fantastical monsters and beasts seemed as likely and provable as those of real animals living in far-off lands. Also, the writings of ancient Greek and Roman scholars persisted as authoritative sources of knowledge of the natural world. Since those ancient writers, such as Pliny the Elder (AD 23/24 – 79), Aelian (c. 175 – c. 235 AD) and Herodotus (c. 484 – c. 425 BC), often infused mythology into their works, these ideas were passed down as well. Stories of the existence of these creatures remained in natural history works through the early modern period, taking many years to sort truth from fantasy.

The images on this page are from the original 1497 edition of Hortus Sanitatis, held in the UAB Reynolds-Finley Historical Library. Unless otherwise noted, the descriptions are transcribed from An early English version of Hortus sanitatis (1520’s; Reprinted 1954). Some spellings have been changed for the benefit of modern readers.

In Hortus Sanitatis, mythical monsters appear confidently alongside known species in far-off lands, such as the giraffe who shares a woodcut with the unreal animal called 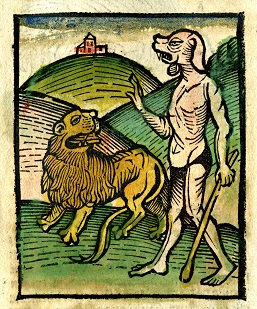 Onocentaur (box to the left). After all, there was just as much evidence of their existence from the perspective of the book’s publisher. Also displayed is the Cephos (right), who has the body of a man and the head and mouth of a blood-hound, and who appears to be in conversation with a lion. According to the text, this monster has been seen in the plays at the theater of Pompeyus in Rome. 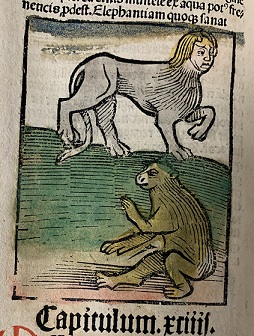 The animals within Hortus Sanitatis reflect the challenges faced by those trying to depict nature during this period. Amongst the sea monsters is a pair of what looks to be merfolk with inadequate facial features on the head, but eyes and mouths displaced on the torso. This is actually an attempt to depict dolphins (box to the right) by one who has clearly not had the opportunity to see them first-hand, living in a time long before photography. Therefore, some of the strange and hybrid animals within this book may reflect an attempt to describe actual animals by composing body parts of known species. Another example is the marmoset, a real ape that is depicted with a human face (left, above). 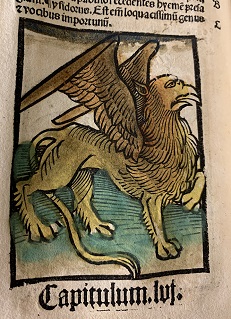 “The grype (Griffin) is both bird and beast and it hath wings and feathers and four feet and the whole body like the lion, and the head and forefeet and wings be like the eagle, and they be enemies both to horse and man, for when they may get them they tear them asunder. In Scythia of Asia be right plentiful lands where as nobody cometh but these grypes, and that land is full of gold and silver and precious stones, and they be bred in the mountains of Hybori [Hyperborea], and they of Arismaspi fighteth against them for the precious stones. Albert sayeth he hath claws as much as the hornes of an ox whereof they make dishes for to drink of and they be very rich and costly.” 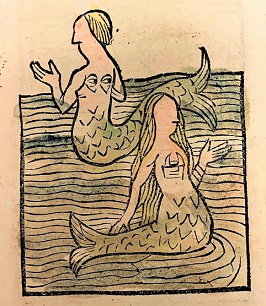 “Delphin (Dolphin) is a monster of the sea and it hath no voice but it singeth like a man and toward a tempest it playeth upon the water. Some say when they be taken that they weep. The dolphin hath none ears for to hear, nor no nose for to smell, yet it smelleth very well and sharp… They hear gladly playing on instruments as lutes, harps, tambours, and pipes. They love their young very well and they feed them long with the milk of their pups and they have many young and among them all 2 old ones that if fortuned one of the young to die that these old ones will bury them deep in the ground of the sea because other fishes should not eat this dead dolphin so well they love their young.”

Click on the thumbnail to see a larger image and to read the monster's description. 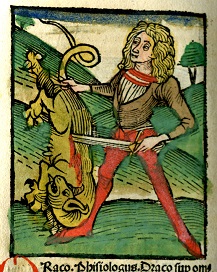 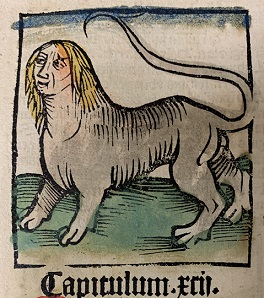 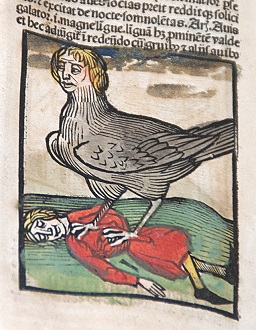 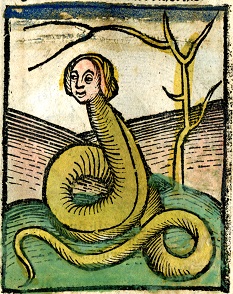 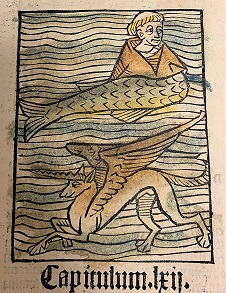 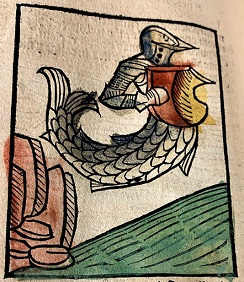 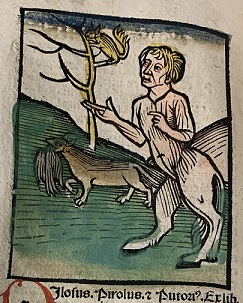