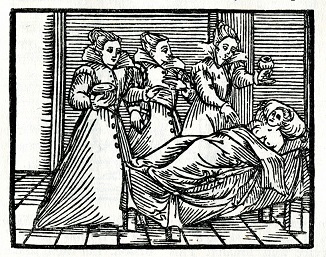 Illustration of women delivering their concoctions, from Compendium Maleficarum (1609, Reprint 1929). 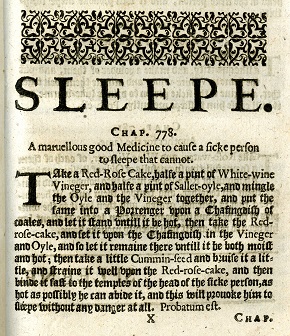 This typical early modern herbal concoction to aid in sleeping comes from George Wateson’s A Rich Storehouse; or Treasurie for the Diseased (1631).

During the early modern period, university-trained physicians were fewer, further between, and more expensive than the various types of unlicensed healers of the community. Therefore, many people resorted to local wise-women, also known as cunning folk (including both men and women), herbal folk healers whose knowledge was passed down through generations or learned through exploration of the nearby field and forests. Many of these such healers were illiterate, and so they came up with rhymes and songs to remember their concoctions, which may have inspired the witches’ spells found in literature and myth, such as the one chanted by Shakespeare's Weird Sisters.

If anything went wrong with their treatments, and sometimes even when things went well, these healers ran the risk of being accused of witchcraft. In 1613, a wise-woman named Barbe Barbier of Saint-Nicolas in Lorraine, France, agreed to supply a remedy to a neighbor with reluctance after women of the same occupation had gone on trial for witchcraft. According to the record, “She feared to do it because as soon as old people teach some treatment for the sick they are said to be witches” (Robin Briggs, Witches & Neighbours, p. 242).

Women were more common in the roles of the cunning folk. As they got older, their former responsibilities of caring for the health of a family often extended to the community. Some historians have proposed that the witch-hunts represented a concerted effort to drive women out of health care, and certainly this period shows a significant shift towards licensures and educated male practitioners. However, others have argued this “campaign” had less to do with gender than professionalization of the medical field (Briggs, p. 241). 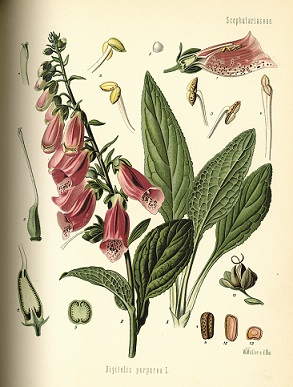 Medicinal recipes were often passed down by women for many generations. Sometimes the knowledge of these traditional healers made its way into scientific and scholarly medicine. For example, in his 1785 book, English physician William Withering gave credit to a local wise-woman for suggesting he use foxglove (or digitalis) to treat heart conditions, which proved an effective therapeutic. Withering explains that he became aware of the remedy in 1775 from a family receipt of “an old woman in Shropshire, who had sometimes made cures after the more regular practicioners had failed…”