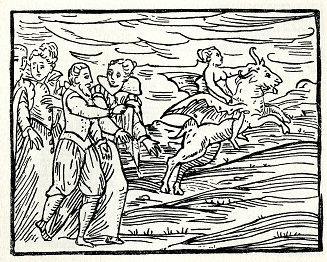 These illustrations of witches in flight and cooking babies for a witches' brew from Compendium Maleficarum (1609; Reprint 1929) support the prevalent conceptions of witches discussed on this page. 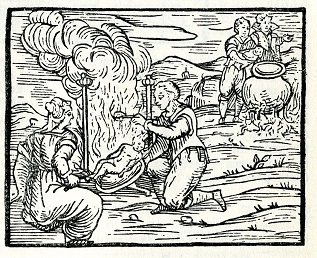 One of the most persistent ideas about witches was that they flew on broomsticks, pitchforks, or animals’ backs to midnight meetings in far-off lands with the devil, demons, and other witches, an event known as the “Witches’ Sabbath.” At these sabbaths, all kinds of offensive, perverse and inhumane activities were said to take place. But what was really going on?

In 1458, a man called Abraham the Jew published an account of an interesting experience. He met a witch in Linz, Austria, who gave him an unguent, or ointment, and told him to spread it over his pulse points, as she did the same. Abraham had the sensation of flying through the air to a place he wanted to visit. When he awoke, the witch told him a different tale of her travels, which inspired him to investigate further. He then asked her to take the ointment while he watched. Instead of flying, he observed the witch fall to the floor and remain immobilized for hours; she woke with further tales. He concluded the unguent induced hallucinations of flying and other fantasies (Lois Martin, A Brief History of Witchcraft, pp. 49-50).

Recipes for the witches’ flying ointment can be found in works of 16th century physicians/scholars Jerome Cardan and Giovanni Battista della Porta, in which the fat of infants is mixed with many various ingredients, including herbs known to have hallucinogenic and paralyzing effects, deadly nightshade and aconitum (Forbes, pp. 268-270).

So why the fat of infants? According to pharmacological studies, mixing the flying concoction with fat allowed it to become an ointment that could be absorbed into the skin (Forbes, p. 269). The use of infants, and more specifically, unbaptized infants, was based on the belief that before baptism, the soul of the child is in limbo and not yet protected by the Church. In the popular imagination, midwives took on a significant role in obtaining infants for this purpose. 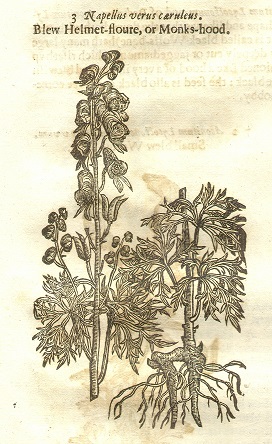 Aconitum, also known as Monkshood, affects the central nervous system, and can cause paralysis. Another herb in the witch's brew, deadly nightshade, can create hallucinations, delirium and confusion. Experiments with the combination have resulted in hallucinations of flight (Forbes, p. 270). Shown here is aconitum, from John Gerard’s Herball, or, General Historie of Plantes (1636). 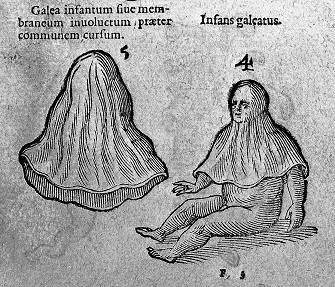 In his 1966 book, The Night Battles, Italian historian Carlo Ginzburg proposed a new theory that the rituals and practices of an agrarian visionary cult from Northeastern Italy, the benandanti, provided many of the traditional ideas about witches. The irony was that the benandantis’ mission was to protect their villages and harvests from witchcraft. However, their visions of nighttime flights and meetings to fight off witches brought on the suspicion of inquisitors who morphed the two ideologies.

Members of the benandanti were “predestined” to belong to the cult, having been born “in the caul,” or amniotic fluid that was said to bestow good luck on a few rare individuals. Italian folklore traditions of witchcraft also claimed that witches were born in the caul (Ginzburg, p. 15).