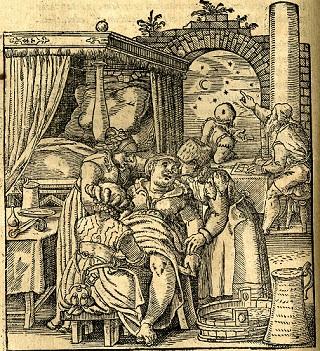 In this illustration, midwives and astrologers practice their arts side by side, from the 1580 edition of Jakob Rüff’s popular Renaissance midwifery book, De Conceptu et Generatione Hominis. 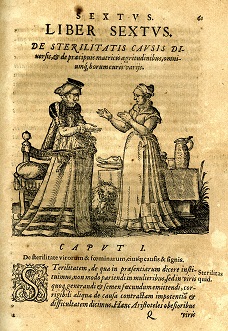 A midwife explains the causes and remedies of sterility, as depicted in the opening to this chapter from the 1580 edition of Rüff’s midwifery book. Methods of contraception could be deduced from information on the causes of sterility. 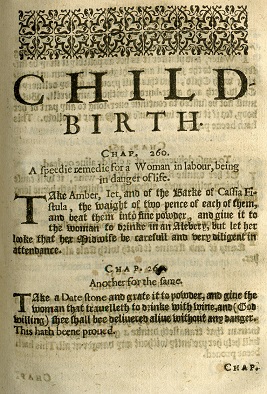 Female Midwives: The Most Witchy Demographic

Healers of all sorts found themselves vulnerable to accusation during the witch hunts. As historian Mary Kilbourne Matossian explains, “The role of the healer was a perilous one, for people were afraid of his or her seemingly magic power over the living body. They might think that someone who could cure disease by magic could also cause it by magic. Restoring health was ‘white’ magic, taking it away was ‘black’ magic” (Matossian, Poisons of the Past, p. 79).

At the same time, a new sociological group, the single woman, was on the rise, increasing from 5 to between 15-20 percent during the sixteenth century, with widows forming 10-20 percent of taxpayers (Blumenfeld-Kosinski, Not of a Woman Born, p. 107). These newly independent spinsters and widows threatened the paternalistic society, and it is no coincidence that women constituted 85 percent of those executed during the witch-hunts (ibid, p. 105). The popular belief was that witches remained unmarried because they had been seduced by the devil.

In this setting, female midwives trained to assist in childbirth became a particularly vulnerable group, with their knowledge of procreation, fertility, successful delivery, and most dangerously, contraception and abortion. Consulted on the most intimate aspects of life, midwives knew about a patient’s adultery, sexual problems, and had the earliest possible access to their infants. Therefore, it is no wonder that they were perceived as having the ability to cause a great deal of harm, and numerous historians have drawn attention to the many horrendous acts ascribed to midwives during the witch craze.

Witches were often accused of killing babies or stealing them from their mothers and handing them over to the devil. Midwives were often accused of the same offense. These stolen babes were replaced with “changelings” which may have been children with birth defects. Robert Burton (1577-1640), author of the famous treatise on mental diseases, The Anatomy of Melancholy (1628), expresses these typical claims against witch-midwives within a section titled “Of Witches and Magitians, how they cause Melancholy,” stating that:

“[Witches] hurt and infect men and beasts, vines, corne, cattle, plants, make women abortive, not to conceave, barren, men and women unapt and unable, married and unmarried, 50 severall waies, saith Bodine: flye in the ayre, meet when and where they will… steale young children out of their cradles, minsterio daemonum [in service of demons], & put deformed in their rooms, which wee call changelings…” (p. 51).

These concerns expressed so aptly by Burton continued throughout the period. An 18th century oath for midwives in England, reprinted within J. H. Aveling’s English Midwives (1967), indicates “You shall not in any wise use or exercise any manner of witchcraft, charm or sorcery…” The fact that these statements kept showing up in midwifery oaths late in the early modern period provides evidence of this persistent suspicion against midwives (Forbes, "Midwifery and Witchcraft," p. 281). 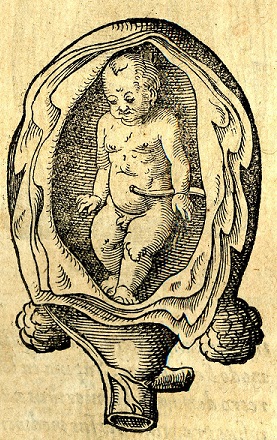 Midwives were often accused of stealing the umbilical cord, placenta or especially the caul after childbirth. The caul is a thin layer of amniotic fluid which in rare cases remains on the infant’s head after delivery. Legends abounded regarding the good luck of children born in the caul, and therefore, witches desired it for potions. Poverty-stricken midwives of early modern Europe were accused of stealing this substance and selling it to witches for extra money, as noted by Thomas Forbes in his article “Midwifery and Witchcraft.” This illustration comes from the 1580 edition of Rüff's work. 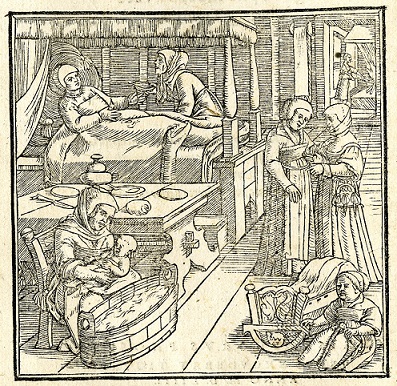 Midwives assisting with the mother’s recovery and care of her infant after delivery, from the first edition of De Conceptu et Generatione Hominis (1554), by Jakob Rüff, in the Reynolds-Finley Historical Library.