Witchcraft, Women & the Healing Arts in the Early Modern Period: A Strange Affliction in Salem

So far we have seen how medical practitioners (particularly female ones) came to be associated with witchcraft and targeted by the witch hunts and trials of the early modern period. This page delves into the ways in which a particular witch craze (that of Salem, Massachusetts in 1692) took on the characteristics of a disease outbreak, along with some possible explanations for the events which have arisen in the subsequent centuries. 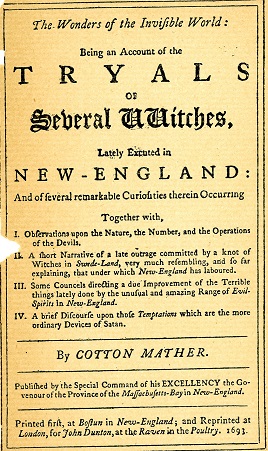 The title page of Puritan Minister Cotton Mather’s famous analysis of the Salem witch trials, from an 1862 reprint in the Sterne Rare Book Collection. Mather believed the dreams and visions of the girls, also known as “spectral evidence,” should be permitted in court, but that additional evidence should be required for conviction.

A Strange Affliction in Salem

In her detailed account of the Salem witch trials of 1692, The Devil in Massachusetts (1949), Marion L. Starkey explains how the incident began with an illness of the village’s female children and teenage girls. In January of that year, Reverend Parris’ daughter, Betty, was struck with symptoms ranging from forgetfulness, motionlessness, starring, and rigidity, to screaming, babbling, and making choking sounds, “sometimes almost like the barking of a dog.” Starkey then goes on to discuss the spread of the affliction:

“And this, alarming enough in itself, had the further disadvantage of setting off Abigail [Betty’s cousin], who caught the affliction as if by contagion… She got down on all fours and ran about under the furniture, barking and braying, and sometimes fell into convulsions when she writhed and screamed as if suffering the torments of the damned… As the news spread, so did the contagion… One girl after another succumbed to the malady until there was hardly a quarter in the village without its afflicted maiden. Around each there assembled a circle of awed watchers. Some came to give aid, to straighten out limbs twisted in convulsions, to hold the victim back from leaping into the fire; others came only to look on” (pp. 39-41).

After another villager, Mary Sibley, baked a “witch cake of rye meal and urine of the afflicted” and fed it to a dog, who was supposed to direct them to any dark magic at work, the girls began to accuse their neighbors of witchcraft (Linnda R. Caporael, [In]: Witches & Historians, p. 68). This set off a craze that resulted in accusations against 200 and the hanging of 19 people. Throughout the witch trials, the hallucinations, convulsions and strange behavior of the girls persisted, and the prevailing explanation of the time was of course that the girls were victims of witchcraft. Later, historians suggested they were faking their illness, a troubling conclusion to make, considering the horrible repercussions of their behavior. 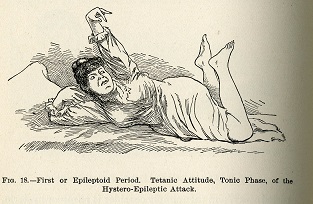 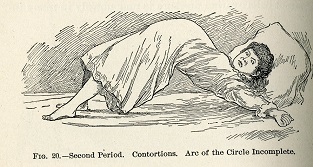 In 1943, pediatrician and amateur historian Ernest Caulfield argued that the girls suffered from hysteria, a psychological illness of excess emotion with various odd physical manifestations ("Pediatric Aspects of the Salem Witchcraft Tragedy," Am J Dis Child. 1943;65(5):788-802).

Shown above are the contortions associated with hysteria, from T. J. McGillicuddy’s Functional Disorders of the Nervous System in Women (1896). Periods of delirium and hallucinations are also represented in McGillicuddy's description of the disorder. The term “hysteria” is no longer used by the American Psychiatric Association, but is now called “conversion disorder.” 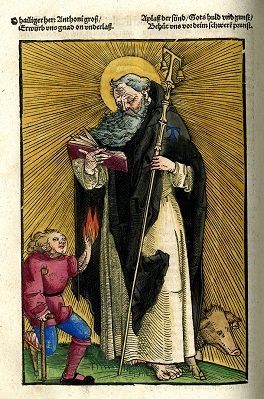 In 1976, behavioral psychologist Linnda Caporael suggested a radical new theory to explain the girls’ behavior: an epidemic of convulsive ergotism, a disease caused by eating infected rye. Ergotism causes convulsions similar to hysteria, in addition to hallucinations, “crawling and tingling sensations under the skin,” and other such symptoms exhibited regularly by the girls during the trials (Linnda R. Caporael, [In]: Witches & Historians, p. 68). Carporeal noted that ergotism is more common in women and children (ibid, p. 64), which might explain its presence in the girls of Salem, while others remained unaffected. Also significant to the evidence, rye was eaten regularly in the community and environmental conditions conducive to ergot poisoning in rye existed in Salem in 1692.

Another manifestation of ergot poisoning is the gangrenous form, which results in the rotting away and loss of limbs. Known as “Saint Anthony’s Fire,” several gangrenous ergotism outbreaks were chronicled in medieval and early modern Europe. The known presence of this form of the disease in Europe has led some historians to speculate that the convulsive form may have also existed and may have impacted the witch craze there as well. Shown left is a depiction of the Saint Anthony's Fire from Hans von Gersdorff’s Feldtbuch der Wundtartzney (1517).